Let me tell you the story of meat puck. The story begins the summer after I started my PhD program. I traveled to Italy for the first time to join an excavation in central Sicily. We were a large team, and the project hired two Sicilian cooks to keep us fed – a Herculean task given that we were dozens of twenty-somethings doing eight hours of manual labor. The project in Sicily was my introduction to authentic Italian food. I savored classics like pesto and caprese and sampled Sicilian specialties like arancini – balls of risotto that are stuffed with various fillings and then fried. Meals were delightful, eye-opening, and washed down with generous glasses of local wine and more than a few limoncellos.

Delicious as dinner was, the main fare was pasta, and night after night of carbohydrates can leave you wanting if your American vision of dinner includes a slab of meat. So there was one particular dish that was greeted with roaring enthusiasm every time it appeared. That dish was meat puck.

Meat puck is basically a large meatball that has been squashed, dusted with flour, and fried in olive oil, like a nugget of Italian meatloaf. The first time the team got meat puck, a light appeared in the eyes of every student who had worked on the project the year before. Knives and forks were seized with uncommon energy, even for that hungry crew.

“Meat puck!” they cried almost in unison, and dug in.

I spoke no Italian at the time, so I couldn’t ask what region of Italy meat puck came from, but it didn’t matter. What mattered was that meat puck was tasty, hearty, and a glorious dose of protein. We got two per serving, and we loved it.

You can imagine my delight when I discovered that meat puck – like pesto and caprese – was pan-Italian. Five years after the project in Sicily, I partnered with an Italian colleague to run a small excavation in Sardinia as my dissertation project. A handful of students volunteered to work with us, and our tiny team bought lunches from a local couple who also catered for the town elementary school. Just a few days into the project, we opened our lunch boxes to find:

“I don’t know what it’s called in Italian, but we got it on a project I did in Sicily and we called it meat puck. It’s yummy.”

My students agreed. From that day forward, meat puck in our lunches was cause for celebration. It was the cherry on top of a day gone well, the saving grace of a day of disasters. And it made me happy, in a circle-of-life kind of way, to introduce a new crop of American students to this delightful Italian classic, as I had been introduced to it five years before.

But Americans are spoiled for choice. I grew up in a Midwestern town that was far from an exemplar of internationalism, and I still had access to Chinese, Thai, and Mexican in addition to the usual restaurant chains. During grad school, when my friends and I would take a break from our studies to get lunch, we first had to decide what kind of lunch we wanted: sushi? Indian? Latin fusion? Maybe try the new vegan place? Americans prize the opportunity to decide what we want, and choosing foods is no small part of this enjoyment. And why not? Even the best cuisines can become repetitive. I admit, after weeks of eating Italian every day in the field, my students and I were starting to wish for variety.

It was a great day, then, when one of the Sardinian workers told me: “you must be excited, you’re getting American food today!”

We were? How did she know? It turned out that the caterers provided a lunch schedule for the parents of children at the elementary school. My students and I spent the morning in rabid anticipation of this unexpected treat. What kind of American food would it be? I closed my eyes and wished that it might, just might, be barbecue. When lunchtime arrived, we threw the boxes on the table, ripped open the lids, and:

There was a stunned silence as we looked at the little fried meatloaves.

The silence lengthened. It took us time to put it together. Slowly, unwilling to believe, we realized:

There it was. The terrible truth stared up at us from a thin pool of olive oil. In a second of disillusionment, meat puck went from a beloved Italian specialty to a sadly inaccurate American one. Where was the cheese? The lettuce? The tomato? What about ketchup and mustard? Where was the bun?

It’s funny how expectation changes everything. I didn’t stop enjoying meat pucks once I realized they were hamburgers, but my enthusiasm lost its edge. The concept of Italian-American food was familiar to me, but I had never considered the possibility of American-Italian food. I had never imagined how it would taste to eat one of my national dishes after it had been translated for a different palate. I thought of the Chinese, Thai, and Mexican restaurants I had grown up with, and wondered how deeply those dishes were doctored so they would sell to a bunch of Ohioans.

I can’t deny that the story of meat puck has a kernel of disappointment. But I like to think it’s really a story of hope. A story of cultural exchanges waiting to happen, of important culinary bridges remaining to be built. The story of meat puck is a call to introduce Italians to the fresh, smoky, succulent flavors of the genuine American classic. And with this sacred duty in mind, I squared my shoulders and walked through a crisp fall evening to my friends’ house to cook them hamburgers. On a grill. With cheese. Without olive oil. 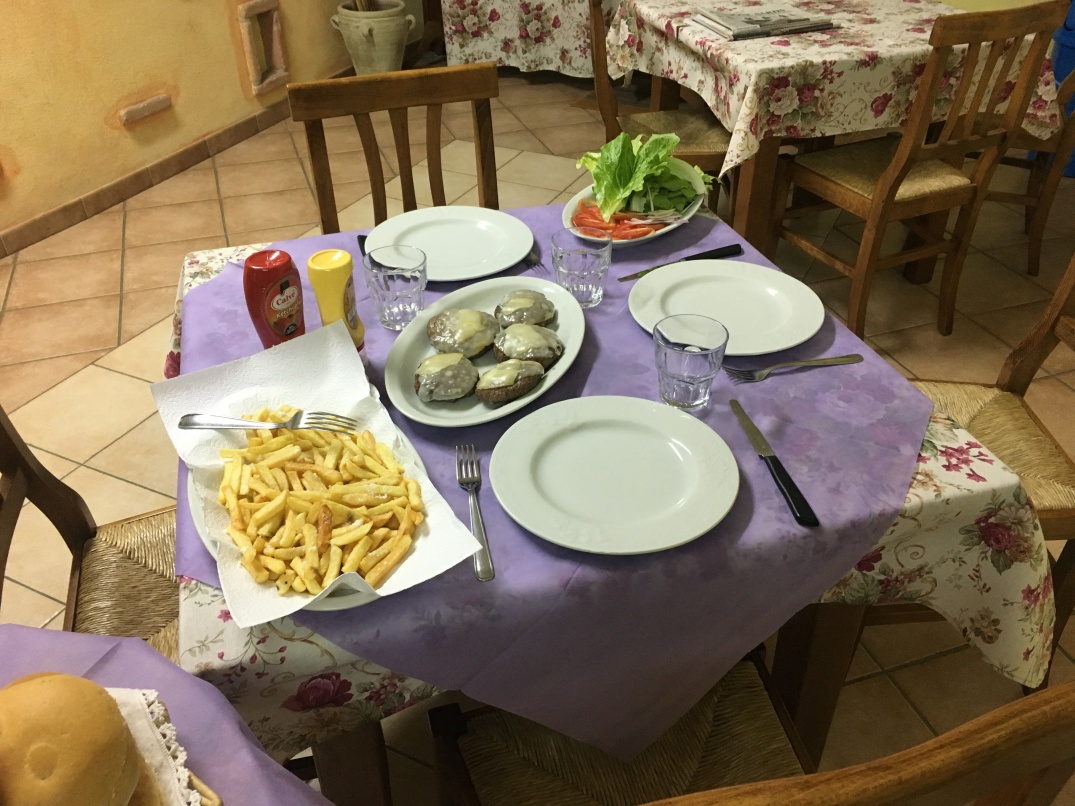 One thought on “The Story of Meat Puck”